PLEASE HELP SAVE US!!!

CLICK HERE: PETITION TO SAVE THE SALMON OF THE AVON RIVER, NOVA SCOTIA 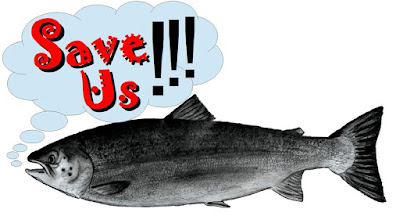 Soooooo, we're back at it and it's time to act fast if we are going to properly solve the fish-issue at the Windsor Causeway in Nova Scotia. As you all may know, the Province of Nova Scotia has a costly plan to build yet another 'test' aboiteau on the Avon River and is going to start construction this month - January!!!

TIR's initial plans are to start cutting a trough across the salt marsh and fill it in with boulders. They are driven to build a second aboiteau with doors and gates capable of stopping flow of the river and impeding any fish from entering their critical habitats. This will undoubtedly cause more damage to the river and stress/possibly harm many fish species, most importantly the endangered Wild Atlantic Salmon. 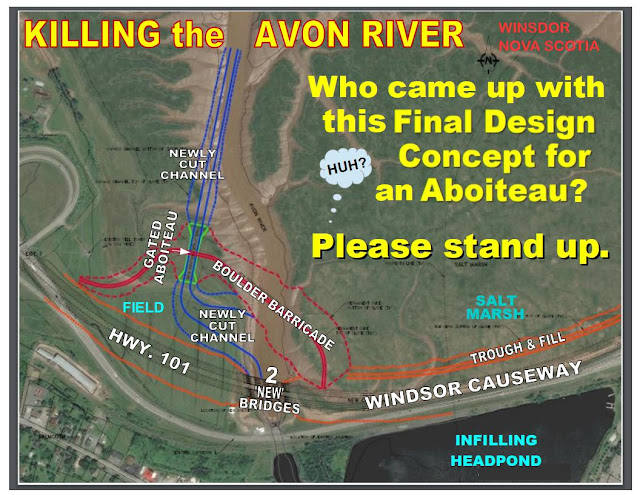 In 1968 the first aboiteau was built without 'proper' fish passage, blocking the river and stopping many fish from entering their critical habitats. 50 years later, we know the ill result that took place on the entire Avon River; the serious decline in fish populations and the destruction of a once healthy watershed. The new barricade will definitely ensure our river and its fish another 50 year death sentence.

For nearly 20 years the Friends of the Avon River (FAR) and others have lobbied government to fix the problem especially for the salmon like they did on the Petitcodiac River, New Brunswick in 2010. A portion of that causeway was removed and a bridge was built allowing the return of natural free tidal flow. This ensured safe and easy migration for these 'Species at Risk' and recovery to the river.

Our petition is asking government to fix the Avon River and its species crisis by removing a portion of the causeway to allow the return of its natural flow.  We need your help to turn back the 'hands of time' on this vital watershed, in order to protect the endangered salmon for our future generations!


NOTE: After signing, you will receive an email requesting you to confirm your signature.

Thank you so much for your time and ongoing support - it means a lot.
May 2020 be the best year ever for all of us, including the Salmon of the Avon River!

Atlantic Salmon (Salmo salar)
Atlantic Salmon was a staple fish economically, as well as culturally for the Maritimes, Atlantic Salmon are among the largest of the salmon species of fish, growing on average 75cm and 5 kg, however some may grow much larger depending on how many years at sea they've spent consistently. Salmon live in the ocean, often migrating large distances before returning to their native stream to spawn. Unlike most Salmon, Atlantic Salmon can spawn a few times before they die. Salmon consume small fish and bugs as juveniles, but in adulthood eat Arctic Squid, Sand eels, Shrimp, and sometimes herring. Atlantic Salmon have been fished by the Mi'kmaq, Acadians, and first planters, traditionally they have been smoked and preserved. Until the turn of the 20th century Pisiquid was called “Salmon River” on marine charts. During the “Golden Age of Sail” the Salmon population was in jeopardy due to the mills dumping saw dust into the river. The tannins from the wood poisoned the water, nearly killing all of the Salmon. After a ban was placed on the dumping of saw dust into the river the Salmon population eventually returned to normal, after a period of 17 years. (Avon River Heritage Society)

Back to the Future (Part 1) - A Tale of Two Rivers

THANK YOU FOR YOUR SUPPORT